How to Choose Between an Island or Peninsula 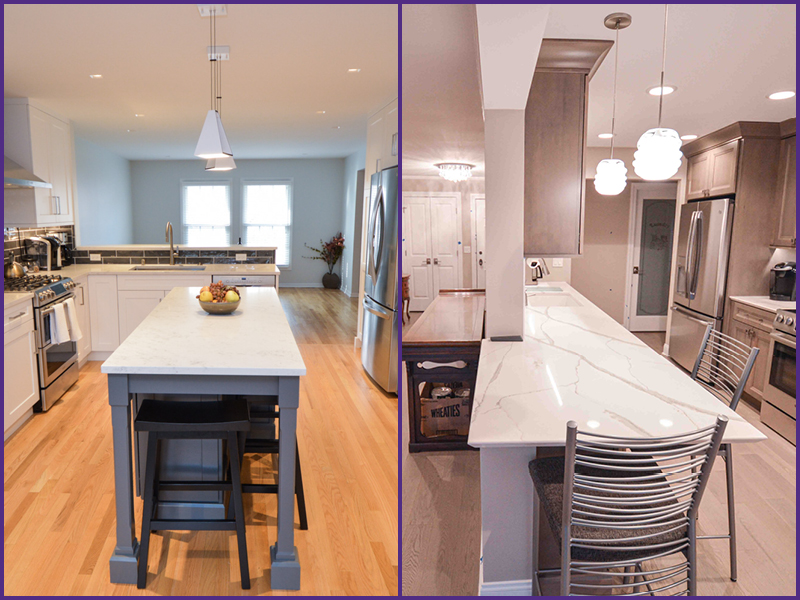 When the average person hears the words ‘island’ and ‘peninsula’, their first thought is a tropical getaway. However, for those of us in the Kitchen and Bath industry, our minds turn to two popular solutions for making a kitchen less isolated. As a matter of fact, both features actually mimic their landmass namesake. An island is detached from all other structures and acts as a standalone piece in the room. Whereas a peninsula has one edge attached to another wall and the peninsula part juts out, often dividing the kitchen from the adjoining room. While islands are the trendy, flashy option, a peninsula serves its purpose just as well, and might be the answer to all your problems. However, as with any big decision, you should do a little research to determine the right fit for your space and lifestyle.

The Treasure of an Island 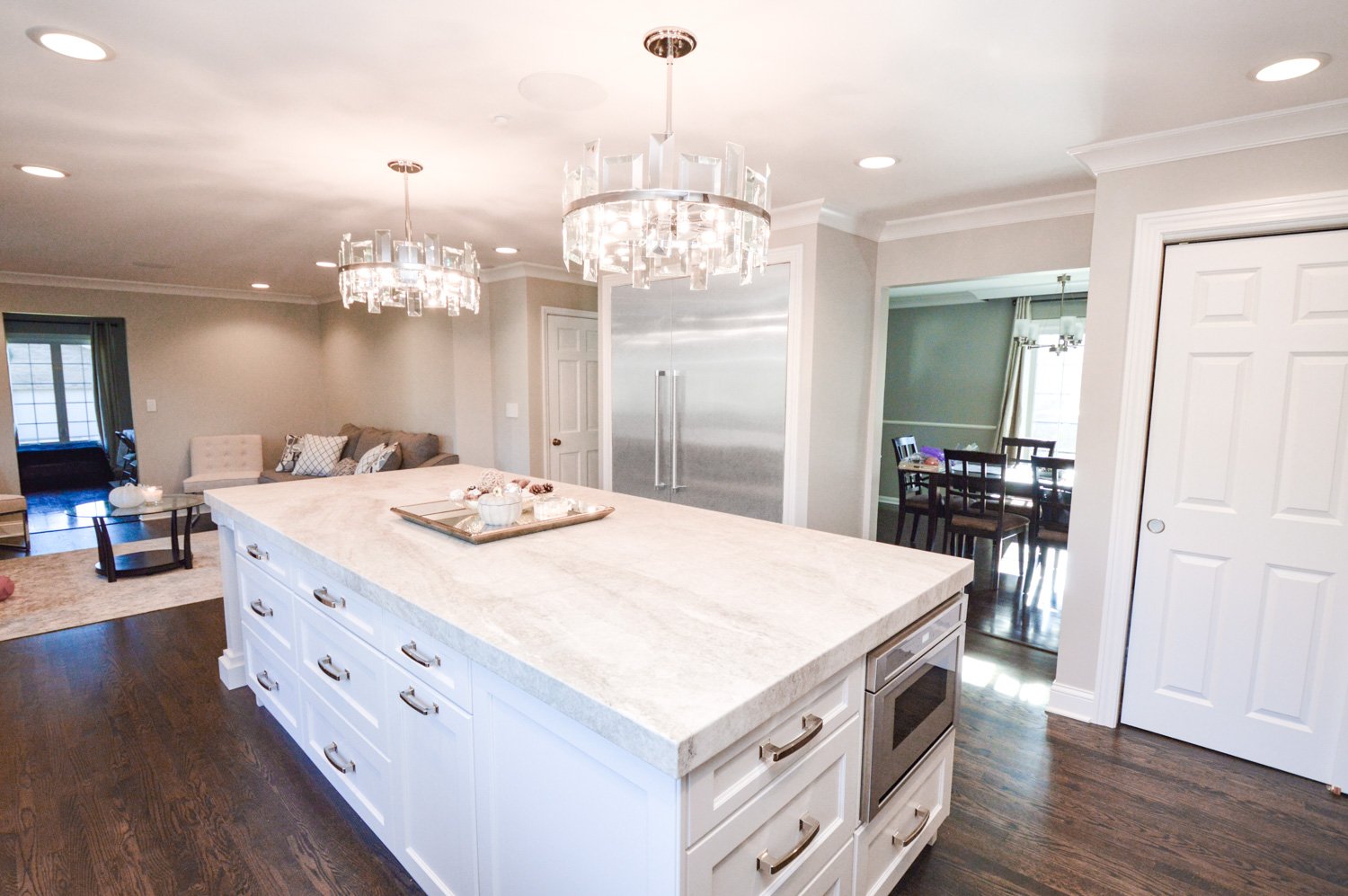 If you’re like me, and have watched HGTV until your eyes glaze over, you’ve probably noticed the popularity of adding an island to the kitchen space. After all, who wouldn’t want an island? The increase of storage availability and countertop space is enough to convince anyone that this is a must for their kitchen.

Yet, that might not even be the top benefit for you. In fact, many of our clients love islands because they create space for friends and family to gather with extra seating. For busy chefs, you might feel like these guests are infringing on your creative cooking frenzy, however, it is better than the bleak alternative of feeling like you're missing out on golden memories as you hear roars of laughter coming from the other room and you're stuck in the kitchen. An island, however, makes that less likely. Not only will your guests filter into the kitchen to chat with you, but with an island you’re more likely to achieve your dream of an open floor plan. In fact, islands are often the choice for open concept kitchens in order to offset the loss of a kitchen wall.

In addition to decreasing isolation, kitchen islands have the unique ability to add contrast and personalization since they don’t require the same cabinets and countertops as the perimeter of the kitchen. This allows for the island to be a great place to embrace trends, such  as black, navy blue, or emerald green cabinetry.

Of course, there are reasons why an island might not be the right fit, especially when it comes to the dimensions of your space. If you have a smaller kitchen, and no ability to increase the size, an island probably won’t fit. You need at least 36 inches of walking space on each side of your island. This number increases if you choose to store certain appliances in your island, such as a microwave.

If you want an island, but can only achieve one by tearing down a wall, know that wall removal can significantly increase the cost associated with your kitchen remodel.

The Pride of a Peninsula 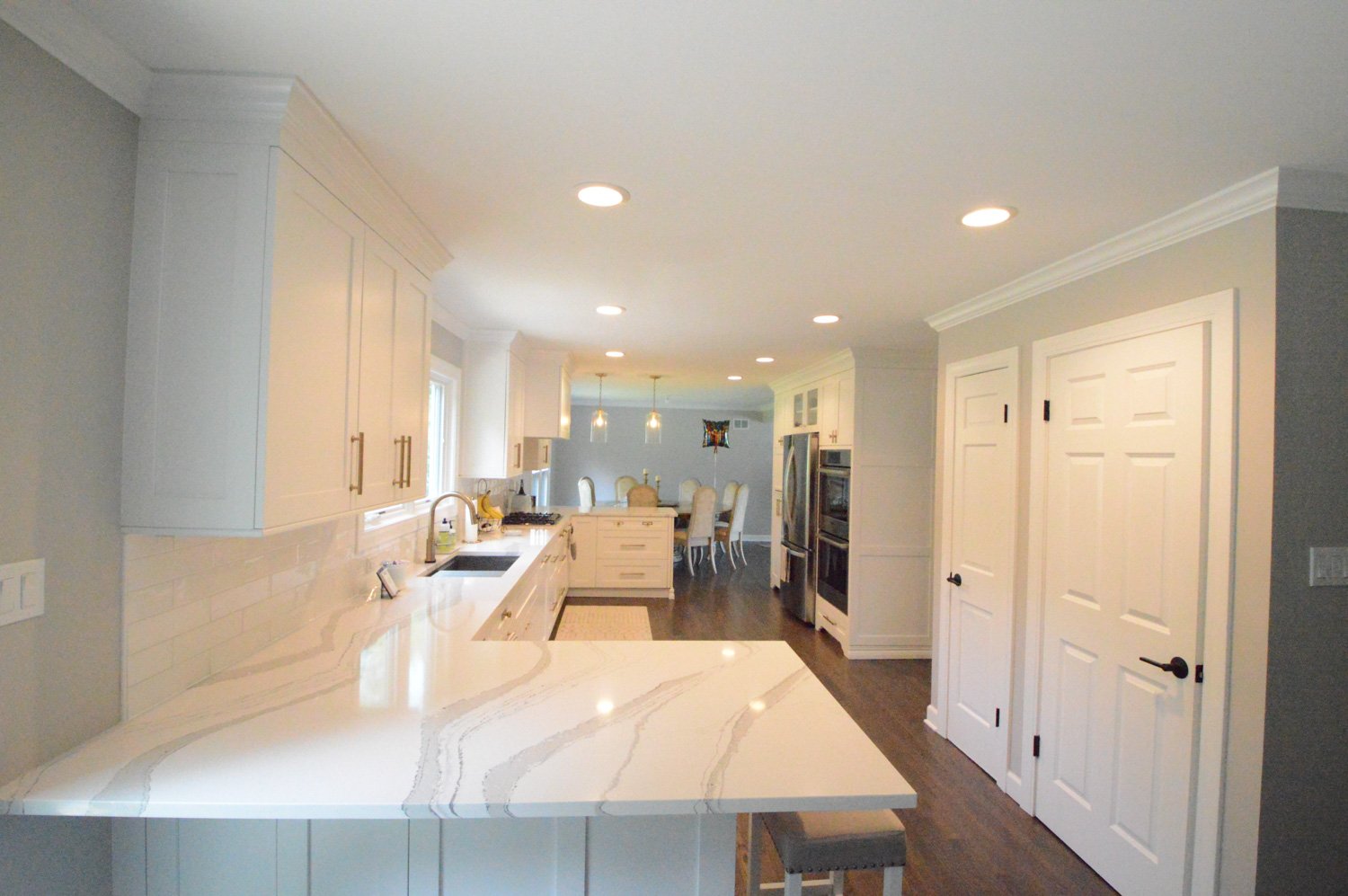 Perhaps you have a smaller kitchen and increasing your budget to knock down a wall is impossible, or even if you knocked down a wall, there still wouldn’t be enough room for an island. Or maybe, you would like to socialize while you’re cooking, but you don’t want guests to be in the way. A peninsula is the perfect solution to create this clear, yet soft, boundary. A peninsula is tagged onto an existing wall or countertop, but extends into the kitchen rather than continuing along the wall. A peninsula still creates an island-like space with the addition of cabinet storage and optional seating on one side. However, unlike an island, the cabinetry and countertop should match the perimeter materials in order for it to be a seamless continuation. If you get overwhelmed by guests in the kitchen, this option still opens up the space to the other room, but leaves a clear dividing line, allowing guests to sit and chat, while technically sitting outside of the kitchen.

It’s also a potential solution for when you want to open up a wall but it turns out to either be a structural wall, or a wall containing unmovable plumbing or electric. Sometimes, by just opening up a little space, you can avoid the headache and price tag associated with moving these systems around. It should be noted this does not always work.

Overall, a peninsula offers similar solutions as an island: extra storage, extra work space, and additional seating. However, the solutions may have a little less impact, considering that with an island, you have four potential sides for storage. Peninsulas also feel like more of a continuation of the kitchen and less of a design statement in the center.

Increase the value of your home with ROI of a bathroom